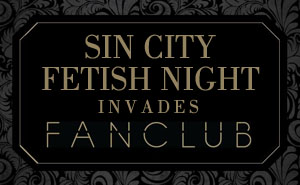 One of the things that we love the most about Sin City is how huge and wide a range of fetish styles we have represented amongst our colourful crowd of sexy sinners. There’s no theme at this party other than ANYTHING and EVERYTHING fetish goes!

Note that we are invading a brand new venue for this event : Fan Club!

TONIGHT WE INVADE FAN CLUB, RIGHT DOWNTOWN AT 1050 GRANVILLE. HOWEVER, DO NOT FEAR, THERE IS NO NEED TO EVEN STEP FOOT ON GRANVILLE STREET. PRIVATE ENTRY THROUGH THE REAR ENTRANCE IN THE ALLEY ON THE SEYMOUR SIDE!

We are blacking out the entire front of the club and it will have no access from the Granville Side, nor will the interior of the club be visible from that side. Just tell the cabbie to let you off at the Penthouse Strip Club on Seymour Street – you don’t even need to remember an address. There is a small parking lot on Seymour directly next to the Penthouse, which you can walk through and head right to the back door of the club which we’ll have built up as our front door!

WHY are we going to such extraordinary efforts? Because this venue was MADE for a fetish party, we’ve been dying to bring the kinky community in there ever since we laid eyes on it, and the wonderful folks that run the venue have bent over backwards to invite us into their space and make it work for us! And we know that after one taste, you’ll be as addicted to this venue as we already are!

You can read more about Fan Club at their website!

The unique set up of Fan Club is allowing us to present our MOST EXCITING DUNGEON TO DATE.

The dungeon is one of the hottest spots of every Sin event! Come and indulge your voyeuristic tendencies, or let out the exhibitionist in you and get wild on one of our many kinky play stations, all under the watchful eye of the Vancouver Dungeon Team.

A MELTING POT OF KINK!

Whether you are gay / straight / bi / trans / cross-dresser / young / old / bigger / smaller / human / Martian ….. this party is for YOU! Sin City is a melting pot of kink where people come EXPECTING the unexpected and to party with people they’ve never met before, and we actively promote and encourage an air of tolerance & acceptance at all our events!

From the moment the doors open, party going folk invade the club en masse and Sin is well known for getting crazy less than an hour after the doors open! COME EARLY so as not to miss any of the action!

Stay in the loop for our monthly Sin City Fetish Night parties, as well as the massive annual Vancouver Fetish Weekend! Get news of and links to upcoming events & photo galleries right to your inbox, as well as exclusive advance and early bird discount opportunities to our biggest events of the year!
Your information will *never* be shared or sold to a 3rd party.

No tickets available for any events at this time - make sure to sign up to the Newsletter for first access to events when we are able to have them again!