SIN CITY OCCURS MONTHLY, ON THE SECOND SATURDAY OF EACH MONTH.

There are several times in the year when Sin City has extra or bonus parties in the month for holiday-related or special events, such as Halloween, our Anniversary party, New Year’s and of course, the massive summer Vancouver Fetish Weekend.

OUR HOST VENUE IS THE HINDENBURG, PREVIOUSLY KNOWN AS CLUB 23 WEST!

Map at the end of this listing!

Please direct any Lost & Found concerns to the event venue in question directly via an email or phone call, or drop by the venue in person on one of the nights they are open. The event promotions staff from Sin City are not responsible for or involved with any items patrons may have left behind or lost at a previous event!

Hopefully the venue staff can help you retrieve your items if they indeed were still there during cleanup after one of the events!

About The Hindeburg, our home venue … 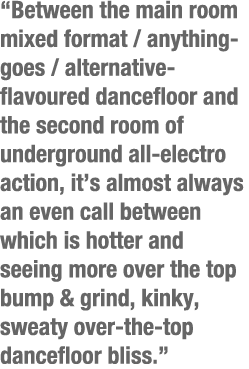 Located in the heart of Gastown, one of the oldest and most historic areas of Vancouver, The Hindenburg is the new name of the newly re-opened venue previously known as Club 23 West, where Sin City originated and threw monthly party after mind-blowing monthly party for over a decade. It eventually closed for renovations for two years, during which time Sin City invaded many other venues throughout the city, opening many, many more doors for the kink scene for subsequent events for venue options, but eventually our original venue re-opened under a new name, and the first thing the new management did was invite us to come back as their marquee Saturday event. And of course we were only too happy to oblige!

A laid back atmosphere and vibe as much like a house party as a club night give The Hindenburg a comfortable atmosphere, added to by the legendary outdoor back patio overlooking Blood Alley. Spacious, heated and private but with a public view, it’s a favorite spot for many.

In addition to the patio, main floor lounge area, main room dance floor complete with dance cages and stage, The Hindenburg has pool tables, and a second room downstairs which is transformed into the all-electronica second room of DJs & dancing at Sin City, known as De:Basement.

The venue has many levels, nooks, crannies and areas to explore. Far from being a place where you can park yourself in one spot and catch all the action without needing to move since the view is the same from everywhere else in the club, it’s totally the opposite…if you don’t move around from time to time, honey, you are going to miss out on the action going on somewhere else in one of the other areas! This leads to a highly dynamic atmosphere, but it also does mean that the venue is unfortunately not wheelchair-friendly, since most of the different levels are separated by a short flight of stairs.

For a more thorough description and tour of our dungeon, please visit the walkthrough here. 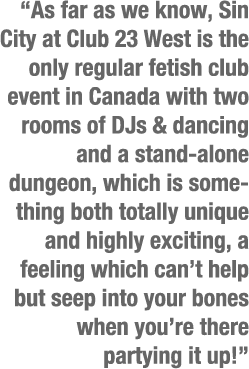 With the extended family of venue owners, club staff, bartenders, security, porters, servers, promoters and DJs for the various nights all ranging from gay to straight to everything in between, The Hindenburg has both a welcome-home atmosphere and a melting pot mixed crowd alternative club vibe unlike almost any other in the city. It is thought by many to be the last truly alternative club in the city, since the vast majority of the Vancouver nightlife is mired in top 40, tourists, high prices, million-dollar nightclubs, hordes of bar stars and the dreaded same ol’ same ol’. Thankfully for everyone who loves both putting on and going to events at The Hindenburg, the owners and operators are as much concerned with supporting the alternative communities they love as they are with the realities of paying them bills, which allows everyone involved both as staff and attendees to take risks, do things a little differently and really push the envelope with the full support of the venue…which is what makes events there so much fun!

“See you there, SINNERS!” 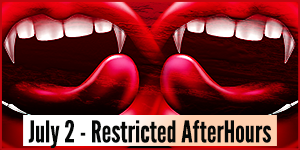