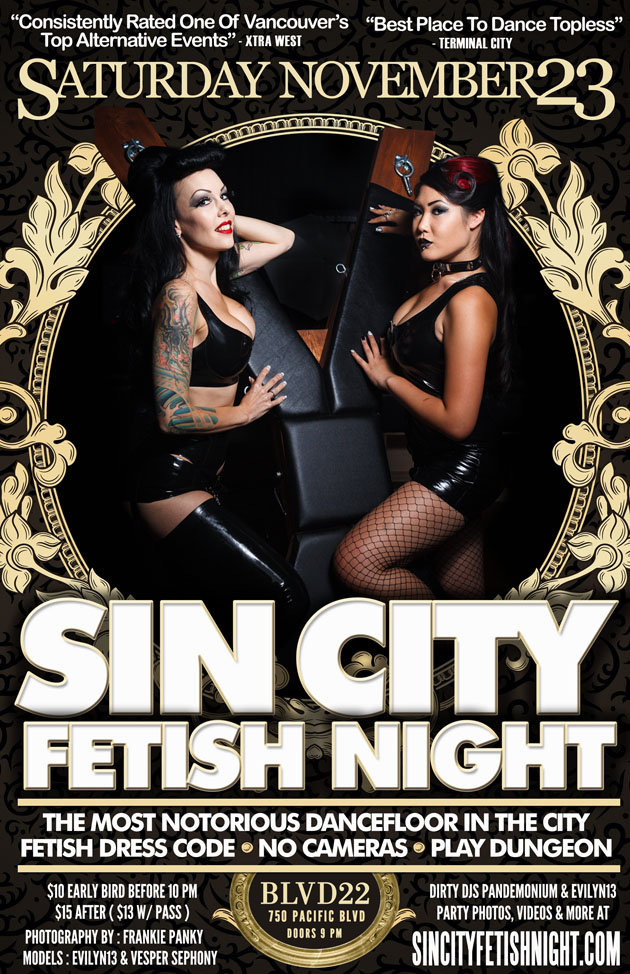 Please note that you cannot see the venue from the street – the front of the club faces into the interior of the Plaza Of Nations. Walk into the Plaza, where the casino is, and you absolutely can’t miss Blvd22. Look for the giant red party tent we are setting up outside the venue!

WE ARE SUPER EXCITED TO BE BRINGING THE FETISH INVASION BACK TO BLVD22 ONCE AGAIN!

We’ve only been there twice before and both times were AMAZING parties with our crowd feeling instantly welcome and comfortable in the venue! We’re bringing the fetish invasion to BLVD22 in the Plaza Of Nations, next to the casino! Ultra chic with a killer dancefloor, loads of comfy seating, $4 drink specials, a dedicated cab stand all night, a Skytrain station and huge parking lot all close by … all adds up to a killer new play space for all our Sinners! You can check out what the space looks like over at their website.

From the moment the doors open, party going folk invade the club en masse and Sin is well known for being already crazy by 9:45 PM less than an hour after the doors open! COME EARLY so as not to miss any of the action!

We are more excited than EVER to present our dungeon in the new BLVD22 space, as it PERFECTLY suits our unique setup and fetish needs! Hosted by the Vancouver Dungeon Monitor Team and Rascal, the Sin City dungeon is one of the hottest spots of every Sin event – come and indulge your voyeuristic tendencies, or let out the exhibitionist in you and get wild on one of our many kinky play stations, all under the watchful eye of the Vancouver Dungeon Team.